Callbox and the Quartered Success of The File Transfer Expert

A group of file transfer software experts from Germany founded this File Transfer Appliance Company in 1996 which later spanned to France and Singapore in 2007.

The company stands on a mission to offer the latest Hardware Technologies coupled with the leading Software Solutions as “Plug-and-Play” appliances designed for security problems and compliance tasks.

Target Contacts: Directors, Business Owners, IT Managers, Person in Charge of IT

The target criteria have remained the same since the campaign started running until the last month.

The campaign’s initial run in April 2011 mainly focused on the Singapore market. The client preferred to cater to companies that send out big files. These are companies that have worldwide presence and do site-to-site file sending, or those that require file-sharing with their resellers or customers.

As the Singapore database was close to being exhausted, Callbox proposed to the client to divert its focus to other countries. In 2012, Malaysia came into the picture and kicked off with 30 leads in the 1st run, and went on alternately running MY and SG markets for the rest of the campaign period, with 18-20 leads per month, renewing contract after contract of 3 or 6 months, until the final leg in May 2015. 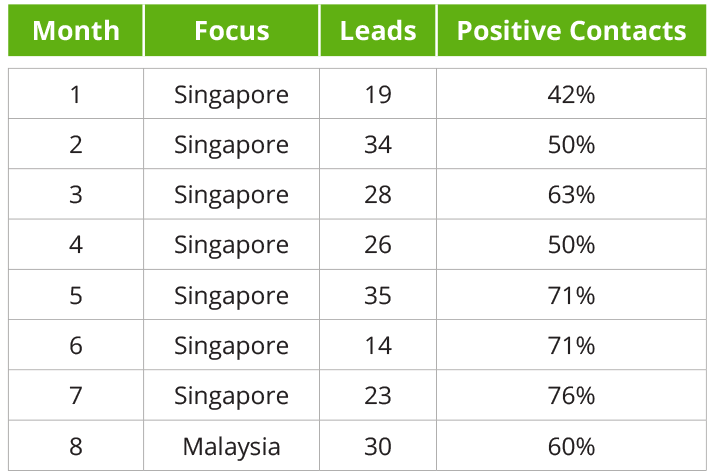 The campaign required the Callbox team more effort compared with the other campaigns. The leads that were passed were strictly qualified based on the set criteria, which were subjected to the client’s scrutiny and approval.

The 4-year run made the most of its target database of contacts. Towards the end of the last 2 months of the campaign, both the Malaysia and Singapore databases went all in, as both target markets have been saturated, yet the campaign was still able to produce 18 leads at the least.

What A Difference It Has Made

This is one of the most successful and longest running campaigns in Callbox. But how was this huge success achieved?

The client truthfully engaged himself with the campaign by sharing full product knowledge with the team by conducting a thorough training on the product specifications, features and usage benefits.

The Callbox team had a first-hand experience of the product as they were able to practically navigate its interface which helped the calling agent efficiently position the offer to the prospects. These best practices also made the leaders effectively coach the caller on the challenges encountered in the calls, making them able to easily address issues that arise from day to day calling.

All available resources in Callbox were utilized.

Calling, sending of emails and other marketing resources like the social media were substantial to the exceptional results of the campaign.
Definitely, this campaign has made history with Callbox.

Get relevant B2B marketing articles, tools, downloads and the latest tips and actionable insights to boost your lead generation and sales numbers!

Or talk to us right now