The Client is Japan’s largest recruiting and information Service Company. They are focused on supporting a diverse range of work style though offering a wide variety of services including job advertisements, permanent placement services, temporary staffing services, outsourcing services, pre organization-related services, and development-related services in an effort to help realize a world in which people can freely choose their own unique work style.

The Client also provides a broad range of services for companies, from employee recruitment to development and assignment. Through their diverse services, they are committed to offering the best HR solutions for business operations.

The Client was planning to launch a new product in Singapore and they didn’t have a marketing team to help them engage with customers. Hoping to reach out to prospects and meeting their deadline, the Client decided to outsource to a company that specializes in reaching new markets and has all the marketing tools including database, email support and social media to manage a campaign and help generate potential clients for them.

Before the campaign commenced, the Client highlighted how crucial it is for them to reach their target prospects for the launch of their product. Prior to signing up with Callbox, the Client had planned a marketing strategy of their own, which was focused on different target locations per week. They decided to apply this strategy to their first Callbox campaign.

Contacts were profiled properly and were sent out an email. To get more interested prospects, the team needed a sustained and focused effort. However, despite much effort exerted by the team, the Client’s marketing strategy gave them less time to nurture their warm prospects, which resulted to failure in meeting the Client’s campaign expectations.

The Client assessed the results and the team provided their feedback on the campaign as well. After evaluating the campaign, the Client and the Callbox team came to the following conclusions.

Having learned much from the initial campaign and armed with insights on how they can make improvements, the Callbox team, together with the Client, made some changes to help improve the campaign’s performance. In order to address the Client’s challenge of reaching out to prospects before the official launch of their product, the team implemented the following:

With the help of the Callbox Pipeline Lead Nurture Tool, the team was able to create a scheme and set a timeline that helped achieve the desired results within the time frame specified by the Client.

Callbox’s multi-channel approach played an important role which resulted to higher number of appointments at the end of 2nd term: 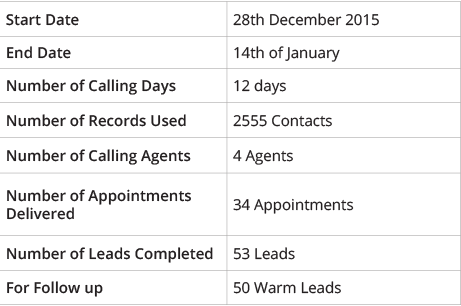 Before the end of the campaign, the client commended the team for their effort, “99% no cancellation of appointments. Only 1% of the appointment was cancelled because of double booking.”

With Callbox’s experience and the team’s expertise in troubleshooting different types of campaigns, together with the Client, they managed to create a customized program to meet the Client’s target and expectations.

Running a multi-channel marketing campaign with the aid of the Callbox’s Pipeline Lead Nurture Tool, the team managed to deliver a higher number of qualified appointments than they would have without it. As a result, the Client decided not to accept more office appointments and advised the team to convert them to leads instead as they no longer have enough people to handle all appointments delivered.

Get relevant B2B marketing articles, tools, downloads and the latest tips and actionable insights to boost your lead generation and sales numbers!

Or talk to us right now